The Perfect Setting for Your Next Event

Historic Hilltop House in Devon, Pennsylvania, home to several prominent Main Line families, was built in 1894 and renovated for public use in 2005.

Surrounded by forty acres of rolling hills, with a glorious view from its wide front porch facing south, “Hilltop” house is as remarkable for its setting as for its spacious, stately interior. Not much is known of the original estate, first established as a working farm. It seems likely that within Hilltop’s walls lies a 1700’s two-room tenant farmhouse that later became the step-down living room of the stately house built on the site between 1895 and 1905. This would be consistent with its location adjacent to Waterloo Mills, the intact agriculture-based, nineteenth century hamlet listed in the National Register of Historic Places. 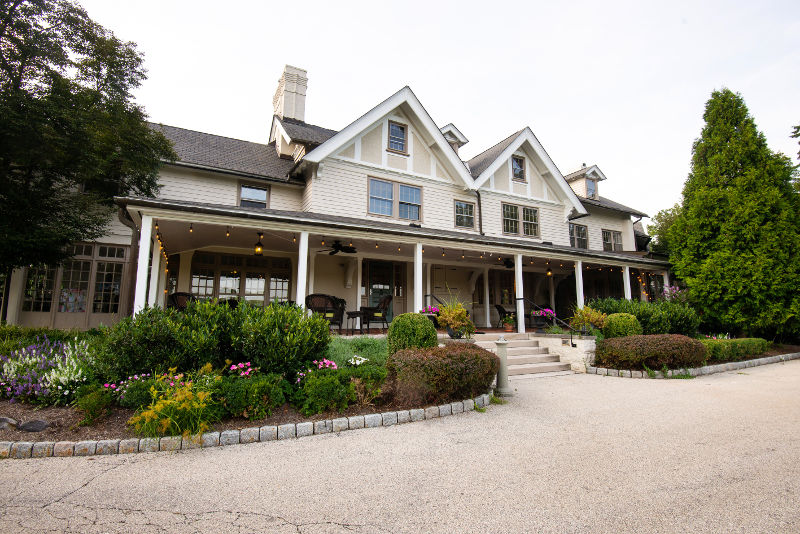 The stables and current home date back to the turn of the century, most likely built by the chocolatier William Nelson Wilbur and his wife, Elizabeth Fitch Wilbur, who bought the property in 1894. It is reported that the estate was then named “Idlewood Farm.” William Nelson Wilbur was the son of Henry Oscar Wilbur, founder of the chocolate company H.O. Wilbur & Sons. The family business thrived in Philadelphia until moving to Lititz, Pennsylvania in 1913. They were known as the inventors of the machine that individually foil wrapped their signature Wilbur Buds. This innovation was stolen by Milton Hershey to produce the famous Hershey’s Kiss. Today, Wilbur Buds are still produced although not wrapped in foil.

The Wilburs sold the property in 1919. The estate was purchased by Samuel Phillip Curtis, who owned the house until 1935, when it was lost to foreclosure during the Great Depression. By then the estate had been renamed Hilltop House. During this time, Charlotte Dorrance Wright, daughter of John T. Dorrance, and her new husband, William Coxe Wright, rented the home prior to moving to Ravenscliff.

The next recorded owner was Thaddeus Trout, who made extensive renovations and additions to the home. In 1959 the estate was sold to Drexel professor Dr. W.H. Sterg O’Dell and his wife, Frances L. (nee Heublein). The O’Dell family resided in the home for 36 years before bequeathing it to Easttown Township in 1995.

Hilltop House was the site of the 1997 Vassar Show House.  The house was completely renovated in 2005 for public use and has been hosting special events and wedding ceremonies ever since.